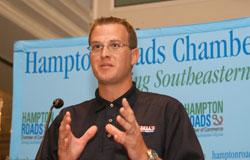 One winner was selected from each of the five cities within Hampton Roads and recognized for excellence in several key areas:  employee growth, innovation criteria, leadership, community involvement, and customer satisfaction.

Smith was presented with the award by William Ward, Mayor of Chesapeake.  During his acceptance speech, Smith thanked his parents, Russell and Audrey Smith, the founders of Russell’s Heating and Cooling, for entrusting their company to his guidance and leadership since their retirement in 2000. 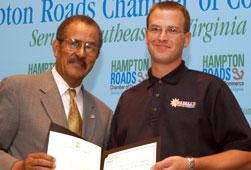 Smith says “ The heart of our company is our people.  We have so many superstars within our organization, and it allows us to do so many amazing things.  They are the reason for any success that we have had and will have in the future.”

Russell’s Heating and Cooling, a family owned and operated business, was founded in 1977.  Russell’s employs 33 people and expects annual revenues of near four million in 2004.

What Our Customers Are Saying

Regular annual maintenance keeps your system operating at peak efficiency. Experience has shown that a system that runs well keeps your utility costs in line — in fact, independent 3rd party research shows that you can save over $30 per month on utility bills.

Just like your annual physical at the doctor’s office keeps you healthy, an annual tune-up or safety and efficiency check on your heating and cooling systems can keep your home working smoothly.